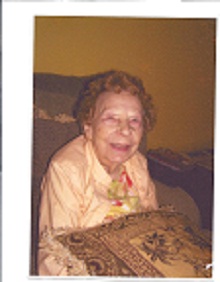 Mrs. Etta N. York age 97 of Keystone Heights passed away Sunday, May 18, 2014 at the Willey Manor ALF. She was born in Darien Center, New York on June 5, 1916 to the late William C. and Grace (Marsh) Nichols and had moved to Keystone Heights four years ago from Chicago, Illinois. Mrs. York was a homemaker and a Chaplain for various nursing homes along with being a Pastor’s wife between 1960 -1983; as a beautician, she would assist her husband in the funeral home. She was an honorary member of Friendship Bible Church in Keystone Heights and a member of the West Chicago United Methodist Church. Mrs. York enjoyed sewing, gardening, completing word searches, crocheting afghans, and reading her daily devotions. She was preceded in death by her husband of 53 years, Reverend Edward J. York in 1991 and eight siblings. Her survivors are her two sons, Brian York of Keystone Heights and Dennis York of Kentwood, MI; five grandchildren and four great grandchildren. Also left behind is her 105 year old sister, Dorothy Van Valkenberg of Buffalo, New York. Funeral services for Mrs. York will be Tuesday, May 27, 2014 at 10:30 a.m., in the West Chicago United Methodist Church with Interment following at Glen Oak Cemetery. The family will be having a celebration of Life in Keystone Heights at a later date. Being as Mrs. York came to know the Lord through the Gideon Bible, the family is requesting that in lieu of flowers please make contributions to the Gideons International, P.O. Box 104, Starke, FL 32091. Arrangements are by JONES-GALLAGHER FUNERAL HOME, 340 E. Walker Dr., Keystone Heights, FL 32656. 352-473-3176.www.jonesgallagherfh.com - See more at: http://www.jonesgallagherfh.com/obituary/etta-york/#sthash.9O8Bpnk1.dpuf