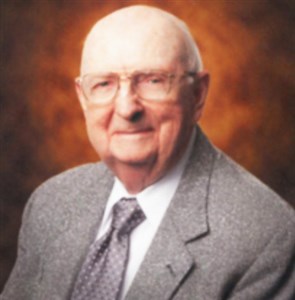 Kenneth Allen Bade, 92, of Kankakee passed away Wednesday, September 19, 2018 at Presence Merkle Knipprath. Kenneth was born on January 26, 1926 in Union, Missouri to Steve Quintin Bade and Irma Eads Bade.
Kenneth had an interest in music at an early age. His mother and father were both members of choruses and his mother was also a pianist. He began taking piano lessons from his neighbor at the age of 11. Kenneth also played the violin and the clarinet in High School.
In 1945 Kenneth began his college education at Olivet Nazarene University in Bourbonnais. He began his career in music by having a double major in piano and organ. In 1949 Kenneth graduated from Olivet with a bachelor’s degree in music and was recognized with Cum Laude honors. After graduation, Kenneth was offered the position of Head of Organ Department where he taught piano, theory, and the Apollo Choir. While teaching full time, Kenneth attended the University of Illinois to begin working on his master’s degree in Organ. In 1954, Kenneth received his Master of Music degree and was the first organist to appear with the University of Illinois Symphony Orchestra. While on the music staff at Olivet, Kenneth served as organist at the College Church of the Nazarene, the organist-choir director at St. Paul’s Episcopal Church, and really enjoyed his time at Central Christian Church for 22 years and Asbury United Methodist Church for 37 years. Kenneth’s numerous activities and friendships may be attributed to the fact that he speaks to people in a language they all understand, the language of music. His time served teaching and inspiring students will be forever remembered. A special thank you to Pete and Nancy Peterson for all the loving care over the years for Kenneth.
Kenneth is survived by 1 niece; Dana (Eugene) Ramirez-Maze of California, 2 nephews; Michael and Douglas Crites.
He is preceded in death by his parents, 1 sister; Gene Tucker and his friend Daniel Liddel.
Visitation will be from 11:00 a.m. to 1:00 p.m. on Monday, September 24, 2018 at Asbury United Methodist Church, Kankakee, IL. Funeral services will be at 1:00 p.m. on Monday, following the visitation at Asbury United Methodist Church. Burial will take place at Kankakee Memorial Gardens. In lieu of flowers, memorials can be made to the Olivet Music Department and the Organ Fund at Asbury United Methodist Church. Please sign his guestbook at schrefflerfuneralhomes.com.