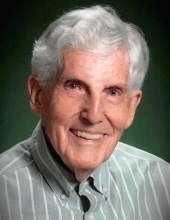 Rev. William R. Warner, 94, passed away on Sunday, September 23, 2018 at Manor Court of Carbondale surrounded by his loving family.

Rev. Warner served his country in the US Army during WWII. He went on to become a Methodist minister for over 40 years, serving several churches in the Southern Illinois area. He was an avid reader all his life. He also had a long standing interest in working toward a better future for all people, including protecting their environment, causes which have extended to his children and grandchildren.

In addition to his wife, he was preceded in death by his son, William Stephen Warner; brother, Edmund Warner; and sisters, Ruth and Marguerite Warner.

Funeral services will be 11:00 AM on Tuesday, October 9, 2018 at First United Methodist Church in Carbondale with Reverends Alan Rhein, John Annable and Bob Morwell officiating. Burial will follow in Zion Cemetery, Carbondale. Visitation will be from 5:30 until 8:00 PM on Monday, October 8 at the church and again from 9:30 AM until service time on Tuesday at the church.