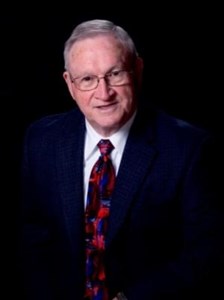 A celebration of Life Service for Rev. Dwight Jones will be held on Wednesday at 10:30 am at Grace United Methodist Church in Salem.  Burial in the Sandy Branch Cemetery in Kinmundy.  Visitation will be from five to seven Tuesday at the Rogers-Atkins Funeral Home in Salem.  There will be an additional visitation on Wednesday from ten until the time of the service at the church.  In lieu of flowers, memorials may be made to the Grace United Methodist Church and may be left at the Rogers-Atkins Funeral Home in Salem.

Rev. Jones was born on January 21st, 1935 in Kinmundy to Lewis Jones and Nell Agnes (Walker) Jones.  He married Della JoAnn Cagle on December 13th, 1957 in Atlanta, Georgia.  He was preceded in death by his parents and his spouse Della who passed away on March 1st, 2015.

Dwight was preceded in death by brother Bill Jones and sister Helen Cox and husband Jack.