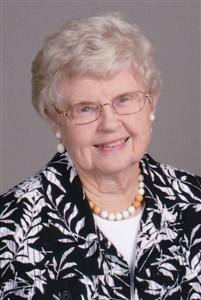 Funeral services will be 10:30 a.m. Jan. 22, at Riverside United Methodist Church in Moline. Visitation will be from 4-7 p.m. Monday, Jan. 21, at Esterdahl Mortuary & Crematory, Moline. Burial will be at Moline Memorial Park. Memorials may be made to “Baby Fold”, 108 E Willow St., Normal IL 61761; thebabyfold@givingfuel.com.

Karen was born April 11, 1937, in Galesburg, the daughter of Arvid T. and Ann J. Erickson Erlandson.

Karen attended Galesburg High School and graduated in 1955. She was very involved with the reunion committee throughout the years. She had many friends that still reside in Galesburg to this day, and also at the Galesburg Covenant Church which was her childhood foundation in church and family. She went on to graduate from a two-year program at North Park University in 1957, followed by graduating Northwestern University with a degree in Medical Technology in 1959, participating at both in summa cum laude. While at Northwestern she met Rev. Roger Christianson in 1960 when he was a Garrett Seminary theological student also on the campus of Northwestern University. She married Rev. Roger F. Christianson on June 11, 1960, at the Evangelical Covenant Church in Galesburg. She and Roger were appointed to United Methodist churches in East Peoria, Carrollton, Colona, Springfield, Cambridge, Good Hope, Bloomington, Beardstown and Milford. He preceded her in death on March 19, 2011.

As an enthusiastic lover of music and from a young age, and an advocate of the arts, she taught piano to many endearing students, directed the children’s choir in Colona, was a member of Riverside UMC choir for many years and in Handel’s Oratorio Society of Augustana College for more than 20 years. Karen was also employed at several laboratories throughout central Illinois as lead technologist and manager. In retirement, she enjoyed walking at SouthPark Mall most mornings for the past 20 years, and spending time with her significant other, Don Jacobsen, and dear friends discussing fellowship over coffee, traveling to visit family and friends, and honing her skills to become a whiz at sudoku, solving the hardest problems in pen! Karen will be remembered most as a kind-hearted, loving woman, who was devoted to her faith, church and family.

She was preceded in death by her husband.

Memories may be shared online by visiting esterdahl.com.