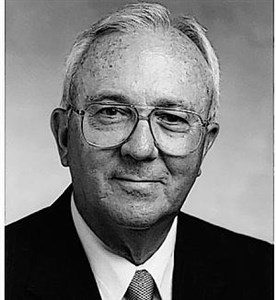 The Reverend Jack L. Adams was born on June 5, 1931, in Harrisburg, IL and grew up in the coal mining community of Galatia, IL. He was the beloved only son of Rex and Essie Adams. Jack was a graduate of Southern Illinois University at Carbondale and Drew Theological Seminary in Madison, NJ.

Jack began his career as a young pastor to four tiny Methodist churches in the vicinity of Crab Orchard, IL, from 1950 - 1953 and at Dickinson Memorial, Staten Island, NY, 1953 - 1956. Other pastorates in Illinois were at East St. Louis, Carbondale, East Alton and Carmi. In 1973, Jack moved to the Missouri East Conference of the United Methodist Church where he ministered at Union UMC and Salem-in-Ladue UMC until his retirement in 1995.

Jack married his high school sweetheart, Mary Lou Fletcher, in 1950. He and Mary Lou had four sons, Steve, Stan, Dave and Greg. Mary Lou passed away in 2011 after 60 years of a wonderful marriage. Jack was lucky enough to find another lovely woman with whom to share his life, Annie (Heagerty) Piskulich. Married in 2012, they divided their time between Ballwin and a home on the Lake of the Ozarks.

In addition to his role as a Methodist pastor, Jack was also a community leader in various organizations in each of the municipalities where he served. Over the years, Jack spent many an hour on the greens with his countless friends from all walks of life. He was a long-time member of Glen Echo Country Club.

Services: Visitation will be held on Saturday, February 1, 9-11 a.m., with a memorial service to follow, at Manchester United Methodist Church, 129 Woods Mill Road, Manchester, MO 63011. In lieu of flowers, memorial gifts may be made to Manchester UMC, Epworth Children and Family Services, or Siteman Cancer Center. As a final gift of service Reverend Adams donated his body to Washington University School of Medicine.