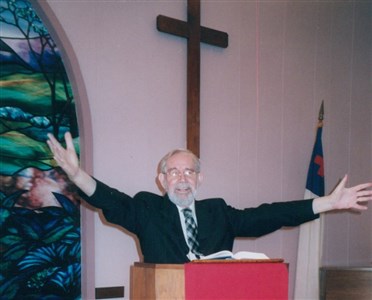 Rev. John “Jack” Lee, 88, of Peoria, passed away on Monday July 8, 2019 at 12:48 p.m. at Manor Court Nursing Home in Peoria. John was born in Camborne, Cornwall, England in 1931 to the late Mabel (Uren) Lee and Gordon Lee. John first married Betty (McLean) Lee on July 24, 1954 in Pool, Cornwall, England. She preceded him in death after 46 years of marriage on May 6, 2000 in Peoria. He then married Genevieve Heath on Nov. 13, 2004 in Peoria. He is survived by his current wife, Genevieve, of 14 years; children Gillian Raley of Washington, Alan (Katie) Lee of Austin, TX, and Elaine Bell (Mike Hackward) of Peoria; grandchildren Rachel, Andrea, Jonathon, Laura, Erin, Nicole, Alex, and Ian; great grandchildren Lucas and James; and the living members of his many congregations. John is also survived by Genevieve’s family who accepted him lovingly into theirs; step-children Robin (Dan) McGill and David (Sherrie) Heath both of East Peoria; step-grandchildren Deron, Danielle, Julie, Danny, Jonathan, Noel, and Heather.

John was born into a poor family in Cornwall and grew up with his older brother Leonard. He lost his father to disease at the age of 6 and was raised by his widowed mother. He left school at 14 to help support the family, even working as a butcher’s apprentice. Even at this early age, though, he felt a calling to the ministry. At 15, he started lay preaching at the local church and became a licensed local pastor soon afterward. He married Betty McLean at 23 and decided to start a new chapter of their lives - immigrating to the United States to become an ordained minister. John and Betty arrived in the US on June 2, 1958. While serving three churches in 3 Ohio towns, John simultaneously tested into college, got his degree in Philosophy from Earlham College in 1963 and his Master of Divinity degree from the Methodist Theological School in Delaware, Ohio in 1967. During this time, John also became a US Citizen. As an ordained minister, John began a journey of service to others. He served as a lay preacher, minister, chaplain, teacher of chaplains, loss and grief counselor, children’s counselor, poet, friend, husband, and father. He served as a preacher for 63 years across more than 17 churches, 5 provinces, and countless parishioners. He loved the intimacy of the small congregation.

John was fortunate to find love a second time and married Genevieve Heath on November 13, 2004, at the age of 73. John and Gennie navigated his eventual retirement from the ministry, his ongoing pursuit of the things he loved, and their life of faith together. John could not have asked for a better partner to share the later chapter of his life.

Whether early or late in life, John had an unending creative streak. Every sermon was new, fresh, and from the heart; every children’s sermon was spontaneous and special for children and adults alike; every counseling session impactful; every poem was deep and melodic. It is difficult to imagine the lives touched by John’s service to this world.

The Lee family would like to thank the staff at Manor Court for providing a safe and loving space for John in the remaining days of his life.

A funeral service will be held at Northwest United Methodist Church in Peoria on Friday July 12, 2019 at 12 Noon. The family will receive friends two hours before the service in the gathering space at the church. Davison-Fulton Woolsey-Wilton Funeral Home in Peoria is in charge of arrangements.

Burial will be at Fondulac Cemetery in East Peoria following the funeral.