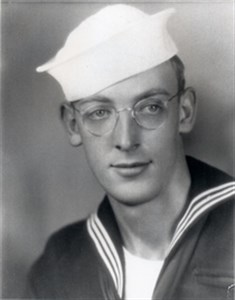 Rev. Atwood was born in Hutsonville, son of Ansel and May (Pearce) Atwood.  He married Roberta Jane Rains January 4, 1941 in Paris, IL.  She survives and lives in The Villas of Holly Brook in Charleston.  He is also survived by his four daughters:  Jeanie Atwood of Valparaiso, Joan (Robert) Dresdow of Charleston, Melissa Jane (Edward) Spivey of Hutsonville and Jennifer Golden (Gary) Rownd of Valparaiso, IN.  He is also survived by eight grandchildren and fourteen great-grandchildren; one niece – Kathy Ann Anderson of Dayton, Ohio and one nephew – Steven Atwood of West Union, IL.  He was preceded in death by his parents and two brothers.

After the war, he worked alongside his dad in the Atwood’s Market in Hutsonville.  When his dad retired, Rev. Atwood bought the business and became a licensed butcher.  His meat case attracted customers even from Indiana.

In 1973 he sold the business, went to Seminary and was ordained a Methodist pastor.  He and Roberta enjoyed many years serving our Lord Jesus in church ministry.  He ended his active ministry pastoring the First Baptist Church in Hutsonville.

For several years, when his daughters were still at home, the family did evangelistic singing in Crawford County and other surrounding counties.  Rev. Atwood’s rich baritone voice blessed many throughout his adult life.

He loved the special benediction found in God’s Holy Word in Numbers 6:24-26: “The Lord bless you and keep you; The Lord make His face shine upon you and be gracious to you; The Lord turn His face toward you and give you peace.”

Memorial donations may be made to the charity of the donor’s choice with envelopes available at the funeral home.  Online condolences at www.pulliamfuneralhomes.com.