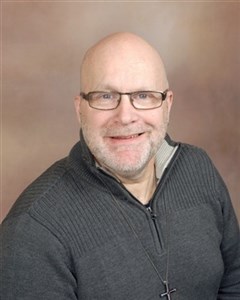 Reverend Mark N. Harris, 58, peacefully left this world, surrounded by his sons and his wife, at their home, in Aledo, IL on October 5, 2019. Mark was the youngest of Richard N. and “Dottie” Dorothy E. (Riley) Harris’ four children. He considered himself a country boy from Godfrey, IL. Mark was a creative child and he loved to entertain people. Whether performing in a play, memorizing comedy routines or creating costumes, Mark was in his element. While attending Alton Senior High School, Mark met the love of his life Joanne on a hayride 43 years ago. Mark was a percussionist in the high school band and played in the Alton Municipal Band. He graduated from Illinois Wesleyan University with a BFA in Acting/Performance. Mark and Joanne were married July 6, 1985 at the Godfrey United Methodist Church, Godfrey, IL. Mark went through many career paths but finally found his passion and calling in the ministry. With financial support from their home church, Godfrey UMC, Mark attained his Master of Divinity from Eden Theological Seminary, Webster Groves, MO. Mark was the associate pastor and youth pastor at Christ United Methodist Church, Fairview Heights, IL, the directing pastor of Saint Joseph United Methodist Church, St. Joseph, IL and most recently was the senior pastor at the Aledo United Methodist Church, Aledo, IL. Mark’s ministry gifts included his passion for people to know Jesus, playing the drums at all three services, creating weekly videos and producing his play, “Free Ride”. His congregation appreciated his leadership and mentoring of their spiritual gifts.

Mark’s joy could be found in his family. He loved spending time with them, and nothing was better than when “The Band” was back together. He was a hands-on father. His love of his wife and sons was evident to all. Mark was diagnosed with cancer in 2017, with only 4 to 8 months to live. Mark fought courageously with dignity and purpose until the very end, 28 months later. Mark wrote a blog, StickwithJesus.com, which chronicled “a daily look at the life of a shaved-headed, earring-wearing, rock drumming, United Methodist minister.” After his cancer diagnosis, Mark wrote about his journey with transparency and authenticity. Mark’s blog served as an inspiration to many also fighting the battle of cancer. Words cannot express how thankful the family is for the outpouring of love and support during his illness and passing, especially his Aledo United Methodist church family. As Mark would say, “God is good all the time. All the time, God is good.”

Mark was preceded in death by his parents. He is survived by his wife, Joanne A. Harris, sons, Sam A. Harris and Hunter R. Harris, siblings, Carol (Lee) Ettinger, Sherry (Jim) Droste, Michael (Karen) Harris, mother-in-law, Betty Allan, sister-in-law, Janice (Paul) Fuchs, as well as aunts, uncles, cousins, many nieces and nephews and great-nieces and great-nephews.
A Celebration of Life is planned for November 9th at 10 AM at the Aledo United Methodist Church, with the Reverend Sylvester Weatherall officiating. In lieu of flowers, memorials or expressions of sympathy may be made to the Aledo United Methodist Church, 301 N. College Ave., Aledo, IL, 61231. Speer Funeral Home, Aledo, IL, is assisting the family and condolences may be left at speerfuneralhome.com.