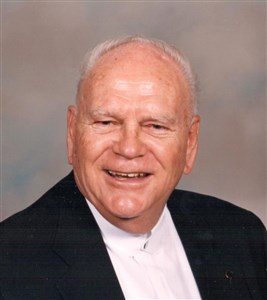 George was born December 31, 1923 in Cedar Rapids, Iowa, the son of George A. and Stella Quaas Youtzy. He married Frances 'Fran' Schilling on December 17, 1964 in Aurora, IL She survives.

George received his education in the public schools in Cedar Rapids and graduated from Roosevelt High School in 1942. He began college at Iowa State University, but was called home to enter the draft in the U.S. Army. He did not go into the service until March, 1947. He married Dorene Delong in 1946. This union ended in divorce in 1963.

Following his marriage to Fran in 1964, the Youtzys moved to Quincy in 1966 to serve as Assistant to the President of Chaddock Home for Youth. He served in that role until his retirement in 1983.

George was a member of the Illinois River Conference of the United Methodist Church. He had been a member of the Quincy Breakfast Optimist Club and served two terms as president of the Noon Optimist Club which has recognized as an 'Honor Club' during his administration. He also served two terms as Lieutenant Governor. Since his retirement, he and his wife have been active at Vermont Street United Methodist Church.

Survivors in addition to his wife Frances include a step-son, Thomas (Rita) Berling of Richardson, TX, a step-daughter, Judith Berling of Berkeley, CA, two grandchildren, and six great grandchildren.

George was preceded in death by his parents, a brother Earl Youtzy and two sisters, Leah Zugschwerdt and Helen White.

Visitation: 10:00 am Wednesday at Vermont Street United Methodist Church until time of services at 11:00 am.