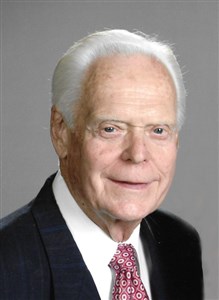 In addition to his beloved wife of 66 years, Bob is survived by his son, Marlin and his wife, Kenna of Rochester, Illinois, and many nieces, nephews, and cousins.

In addition to his parents, Bob was preceded in death by his siblings, Vera Byrd and Jim Hollis.

Mr. Hollis served as a United Methodist pastor for forty-three years. Prior to ordination, his charges included Woodlawn, Shiloh, DuBois, Plattekill and Rossville, New York. After being ordained an elder in the Southern Illinois United Methodist Church, his charges included Patoka, Edwardsville Immanuel, East Alton First, and Belleville Signal Hill. He served as District Superintendent in Vandalia and as Director of Administrative Services in the Conference Office in Mount Vernon. He served as a delegate to many Jurisdictional and General Conferences of the church and was instrumental in the merger of the Southern and Central Illinois Conferences that became the Illinois Great Rivers Conference. Through the World Council of the Church, he served as interim pastor in Leicester, England and Spiez, Switzerland.

In retirement, Bob enjoyed tending beautiful vegetable gardens and fruit trees, mowing his acreage, camping with the Road Runners, and traveling the world. He will be dearly missed by those who knew and loved him.