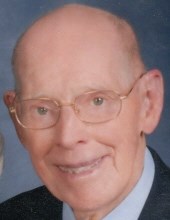 Rev. Dr. Donald “Don” Lewis Lowe, 94, of Bloomington passed away at 3:10 PM on Monday December 16, 2019 at Advocate BroMenn in Normal.
There will be a funeral for Don on Saturday December 21, 2019 at 3 PM at Wesley United Methodist Church. Reverend Sara Isbell will officiate. There will be a visitation on Friday December 20, 2019 at Calvert & Metzler Memorial Home in Bloomington from 5-7 PM. Interment will take place at Camp Butler National Cemetery later.
Don was born in Kinmundy, IL on April 10, 1925 to Cecil and Agnes Morgan Lowe. He married Dawn Thomsen on August 12, 1951 in Beloit, WI. She survives. He is also survived by his two daughters Debra Sasveld of Naperville and Dauna (Mark) Delashmit of Bloomington, six grandchildren Jessica (Tom) Carpy, Kelsey Sasveld, Zack Delashmit, Hallie (Robert) Bartlett, Lucas Sasveld, Sadie Delashmit, two great-grandchildren Raegan Bartlett and Abigail Carpy as well as five siblings, Carroll (Peggy) Lowe of Florida, Richard Lowe of St. Elmo, IL, Mary Rogers of Ohio, Dorris Young of Schaumburg, IL and Clara Packard of Florida.
He was preceded in death by one sister Dorothy Katayama and his parents Cecil and Agnes Lowe.
Don proudly served his country during World War II as a combat engineer in the United States Army. He pastored many United Methodist churches in southern Illinois including the towns of Gillespie, Harrisburg, Collinsville, O’Fallon and Bunker Hill. He also served as the District Superintendent at Vandalia and Lebanon and was the assistant to the Bishop in Springfield from 1986-1994 when he retired. Even in his retirement Don kept busy assisting within the church in any way he could. One of his favorite experiences was when he and Dawn helped to establish Sugar Creek United Methodist Church in Springfield, Illinois. Don loved to travel with his family and especially loved his trips to Lake of the Ozarks and Mesa, Arizona to watch his beloved Chicago Cubs in Spring Training. He also enjoyed playing billiards and various board games with his family. Don loved writing down his thoughts and sharing them in his journals and letters to his grandchildren. Don had a kind and gentle spirit and a wonderful sense of humor. He was regarded by everyone as a true gentleman. Although Don will be sorely missed by all, his spirit lives on in the shared memories of his friends and family.
Don was an active member of the Bloomington Normal Alumni Club and was a Trustee Emeritus and McKendree University as well as a Clergy member of Illinois Great Rivers Conference and the QED Club at Westminster Village.
Memorial contributions may be made to the Cecil C. and Agnes C. Lowe endowed Scholarship at McKendree University.