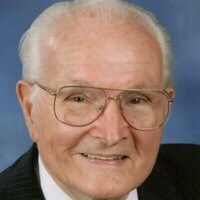 Art was born and raised in Kansas, Illinois, one of the 7 “Webb boys.”  He grew up during the Depression working on the family farm and graduated from Kansas Community High School in 1947.  He attended DePauw University in Greencastle, Indiana, graduating with the Class of 1951 and went on to attend Garrett Evangelical Theological Seminary on the Northwestern campus in Evanston, Illinois, graduating with the Class of 1955.  It is there that he met another student, Suzellen (Suzie) Roest.  They were married on September 13, 1953.

Rev. Arthur Webb’s entire career was dedicated to the United Methodist Church (UMC) starting in 1949 as a Student Local Pastor and retiring in 1998.  Being raised a small-town boy, his desire was to serve small towns throughout Central Illinois, where he was always involved in the town clubs and organizations and was an avid gardener. Once ordained, he served 14 churches starting as an Assistant Pastor in Kankakee and going on to serve the Illinois UMC (sometimes with 2-point charges) in Essex, Reddick, Melvin, Saybrook, San Jose, Havana, Virginia, Farmer City, Manteno and Delavan. He also served on the UMC Board of Ministry for many years.  Retiring after almost 50 years of ministry, Art and Sue moved to Rockford, Illinois, to be closer to their children.

Life was full after retirement.  Art and Sue bought their first home on Spring Lake in Rockford and entertained grandkids at the beach, with fishing and paddle boating.  They were active in Rockford’s Christ UMC and Rev. Webb served a couple local UMC churches temporarily and was very involved in Habitat for Humanity.  Sue and Art loved to travel.  They visited most of the 50 United States including Alaska and Hawaii and enjoyed unforgettable trips to Canada, Europe and the Holy Land. After Sue’s death in 2011, Art continued to travel some with his son Wes and lived a quiet life at Wesley Willows, occasionally staying with his daughters’ families in the Chicago area.

Due to the COVID19 Crisis, a small outside graveside viewing and burial service will be held at Fairview Cemetery in Kansas, Illinois at 1 p.m. on Wednesday, August 5, 2020. Masks are kindly requested.   In lieu of flowers, the family asks that donations be made to Christ United Methodist Church of Rockford, Kansas United Methodist Church of Kansas, Illinois or the Preachers Aid Society and Benefit Fund, Box 19207, Springfield, IL 62794-9207.