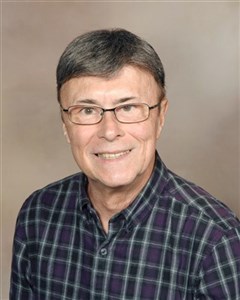 On Monday, October 19, 2020, the Reverend Raymond Dale Radae received his crown of righteousness after fighting the good fight, keeping the faith, and finishing his Earthly race at Barnes- Jewish Hospital in St. Louis, MO.  What a good and genuine servant of Christ!  All of us loved Ray and, yet, it always felt like he loved us more.

Ray was born on December 6, 1947, in Highland, Illinois, the son of Alex J. Radae and Thelma L. Radae.  He was preceded in death by his parents and his beloved sister, Elaine D. Radae.   He is survived by his brothers Alex L. Radae of Dorchester, IL, and Fred (Brenda) Radae of Worden, IL., & many nieces & nephews, great nieces & great nephews.

Ray graduated from Worden High School in 1966 and, after attending cosmetology school, owned and operated Ray’s Village Salon in Worden for 18 years.  Upon receiving God’s call to ministry, he pursued an undergraduate degree from McKendree College and, shortly thereafter, enrolled in and completed a three-year degree from Eden Theological Seminary.  While attending college and seminary, he pastored Worden United Methodist Church, his childhood church and his church home at the time of his passing.  During that time, he also led or assisted with UMC Youth Groups at multiple churches in the area.

Following his ministry at Worden UMC, Ray pastored Piasa UMC in Piasa, IL; Dewey Avenue UMC in Granite City, IL; a two-point charge, Rankin UMC in Rankin, IL and Cissna Park UMC in Cissna Park, IL; Vergennes Faith UMC in Vergennes, IL; and another two-point charge, Edinburg UMC, in Edinburg, IL, and Stonington UMC, in Stonington, IL.  He retired from Edinburg and Stonington UMCs after twelve years of service, completing a total of 26 years of ministry in the Illinois Great Rivers Conference of the United Methodist Church.  In Ray’s words, “It was my privilege and joy to serve God and His Church all my life.”  And, that, he did!  It would be impossible to count the number of individuals Ray touched through his quarter century of ministry as he strived to live and love like Christ.

Ray enjoyed flower arranging, gardening, genealogy, and staying in touch with parishioners from his myriad churches.  His family was very dear to him, and he especially cherished time with his Aunt Millie, and his many nieces and nephews.

Friends may call from 10 AM to 12 noon on Thursday, October 29, 2020 at the United Methodist Church in Worden, IL.  A private family Celebration of Life Service will be held later.  Burial will be in Worden City Cemetery in Worden, IL at a later date.  Memorials are suggested to Worden United Methodist Church.  All COVID-19 guidelines will be observed during the visitation period.