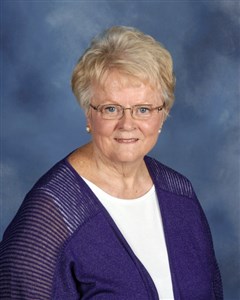 Cremation rites will be accorded and Inurnment will be held at a later date at Oaklawn Memorial gardens, Indianapolis, IN. Calvert-Johnson & Froelich Memorial Home, Minonk is assisting the family with arrangements. Memorials to the Preacher’s Aid Society.

Donna was born August 27, 1943 in Indianapolis, IN the daughter of Clive and Marguerite Matthies Breedlove. She married Rev. David R. Baker on September 11, 1965 at the North United Methodist Church, Indianapolis, IN. He survives along with two children Linda Hauschild of Noblesville, IN and Ross Baker of Pontiac; one brother Dennis (Jayne) Breedlove of Fishers, IN and one sister Diana (Rex) Wiley of Indianapolis, IN; three grandchildren Brooke, Kirstie, and Eryka, and five great grandchildren Devin, William, Charlotte, Parker and Arya.

Donna was a member of the Minonk United Methodist Church. She had a Bachelor’s degree from Universities in McDowell in Illinois. She and her husband are retired clergy with the Illinois Great Rivers Conference, Springfield and the District Office in Pontiac.