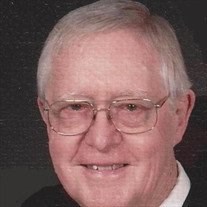 Dr. Robert R. Smith, age 82, of Maryville, Illinois, formerly of Edwardsville, passed away on Sunday, January 24, 2021, at Anderson Hospital in Maryville. He was born February 5, 1938, in West Frankfort, Illinois, the son of the late Roy E. & Allegra V. (Melvin) Smith. Robert was a retired United Methodist Minister who had served Southern Illinois for over 50 years. He is survived by his wife of 62 years, Elaine (Elliott) Smith, whom he married on July 14, 1958. Robert is also survived by two sons, Gary Smith of Evendale, Ohio, Larry Smith & wife Carol of St. Charles, Missouri; daughter, Elise Rebmann & husband Patrick of Columbia, Missouri; four grandchildren; one great grandchild; and a brother, Monty Smith of Carterville, Illinois. Robert was a member of St. John’s United Methodist Church in Edwardsville.
Robert earned a Bachelor’s degree from McKendree College, in Lebanon, Illinois; Masters Degree from Drew University in New Jersey; and his Doctorate from Concordia Seminary in St. Louis.
He will be cremated according to his wishes. Due to Covid 19 there will not be any visitation or services at this time, but a celebration of life will be held at a later date. The family requests memorials to Twigs for Kids or St. Louis Symphony Orchestra in care of Weber & Rodney Funeral Home in Edwardsville.