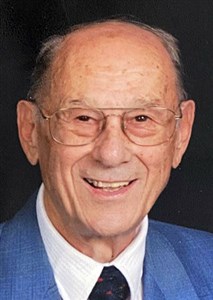 The Reverend Dr. Vernie T. Barnett, a retired United Methodist minister, 93, of Decatur, Illinois, died Saturday, February 20, 2021 at home. At his request his body has been cremated, and there will be no public worship service. A private family service will be held at a later date. Memorials may be sent to Grace United Methodist Church or the Preachers' Aid Society, P.O. Box 19207, Springfield, Illinois, 62794.
Vernie was born November 21, 1927 in Metropolis, Illinois, the son of Vernie and Nell (Kennedy) Barnett. He married Beverly Ann Cochran in 1949.
He was converted at an early age and as a teenager felt that he should be a minister. He
was given a license to preach and when he was only 16 and a senior in high school was appointed to five small country churches. For 55 years he served as a Methodist minister appointed by the bishops to both very small and very large congregations. His last eleven years as pastor were at Grace United Methodist Church, Decatur. He also served in administrative positions of education, superintendence, and pensions. He had degrees from four universities. When he was District Superintendent Vernie, along with his wife and children, formed a new congregation in the only county in Illinois without a Methodist Church. Beverly taught the Sunday School and Vernie preached. It continues as an active congregation today.
His peers and bishops were very appreciative of his leadership. For thirty years the bishops appointed him to be a part of the World Methodist Council. He was asked to preach the memorial service at three different Methodist Annual Conferences. His peers elected him to lead the delegation to three General Conferences of the United Methodist Church, a record no one has exceeded. He spoke in almost every United Methodist Church south of Interstate 80.
Vernie met often with Christians of the African American community and other interfaith groups. He was especially grateful for his close association with the Roman Catholic Church. When he arrived in Decatur in 1967 to serve Grace United Methodist Church, Monsignor Powell visited with him and told him he prayed for him each day. Father Tracey joined him at Grace Methodist performing a marriage for one of his daughters. He was perhaps the first minister allowed to bury a Protestant person in the Catholic Calvary cemetery. Father Sestak wrote him a long personal letter when his father died. Vernie was allowed to preach to a full sanctuary of worshipers at St. Patricks in Decatur.
Vernie was a member of Rotary for over thirty years. Among his many memberships on boards and agencies, he was on the board of directors at the YMCA. He went as a representative of the U.S.A. to a YMCA conference in Vienna, Austria. While in Vienna he preached in the German language to a local congregation.
Vernie performed over 500 weddings. His first ceremony was for an 80 year-old man and a 76-year-old woman when he was 16 years of age during World War 2. (Great premarital counseling?) One of the last ones was for a Jewish woman friend and a Roman Catholic man under a Jewish canopy. So a protestant clergy joined a Jewish bride and a Catholic groom in a beautiful ceremony.
Vernie's love for his wife Beverly continued through their long marriage. They were devoted to and enjoyed their family. The family traveled extensively including two six week trips to Europe. Each grandchild was taken to grandparents church camp. Also each grandchild was taken on a trip to anyplace they wanted to go in the continental USA.
He is survived by his loving wife of 71 years, Beverly of Decatur; daughters: Cynthia
(Isidro) Rivera of Lawrence, KS; Ann (Peter) Erickson of Champaign, IL; Jennifer (James)
Tallent of Decatur, IL; son Ted (Melanie) Barnett of Melbourne, FL. Grandchildren: Eleanor Rivera spouse Ben Post of Murray, KY; Aurora Erickson and partner Chris Hayes of Lowell MA; Austin Rivera and spouse Diana Abernethy of Montgomery, Al; Andrew Barnett and spouse Valerie Wanamaker of Ashville, NC; Benjamin (Rachal) Erickson of Mahomet, IL; Nathaniel Tallent and fiance Jessica Mayberry of Decatur, IL; Katharine (Ian) McArthur of Waupaca, WI; Angela (Ulysses) Harris of Decatur, IL; William Erickson and partner Maureen Wietecha of Champaign, IL; and Melissa Tallent of Decatur, IL. Great-grandchildren: Aaron, Jocelyn, Aura, Juliette, River, Quinton and Arya. Sister: Jane Raphael of Decatur, IL.
Vernie was preceded in death by his parents, sisters Bonnie Barnett and Georgia Hector, and daughter Angela Barnett.
Vernie and his family were very grateful for the concerned and professional care provided by Dr. Gregory Totel and Dr. James Wade III and their staff.
Beverly can be reached at email VTBBCB@msn.com or 217- 422-7688. The obituary was
written by the family.
Arrangements by Dawson & Wikoff, 515 W. Wood St. Decatur, view the online obituary, send condolences, and share memories at www.dawson-wikoff.com.