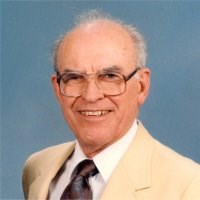 Paul was a veteran of World War II, having served in the U.S. Navy in 1944 and 1945. He was employed by the Atlantic Refining Co. and Standard Oil of Texas from 1952 until 1960, at which time he resigned and entered seminary to become a minister in the United Methodist Church. He served in many capacities in the Central Illinois Conference – camping and youth ministries, pension board, local church pastor in Forrest, Atlanta, Beason and Emden, IL – until his retirement in1980. He then returned to the city where he had grown up, Belleville, and lived there until his death.

He enjoyed teaching and preaching, traveling, learning the history of each place and seeing his grandchildren grow. He especially liked genealogy.

He was preceded in death by his:

Paul is survived by his:

The family wishes to thank Family Hospice and Home Instead for the assistance and encouragement that enabled us to keep Paul at home,

In lieu of flowers, memorials may be made to Signal Hill United Methodist Church, Family Hospice of Belleville, or the Glaucoma Research Foundation.

There will be a Funeral Service for the family and very close friends. A celebration of his life will be held near his Birthday in October 2021.