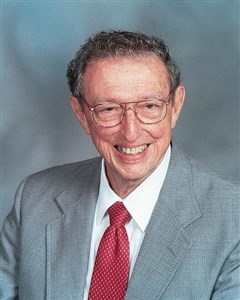 The Rev. Dr. Floyd R. Stradley, an ordained United Methodist minister, went to be with our heavenly Father on June 15, 2021.

He was born Sept. 30, 1933, in Arkansas, and grew up in Decatur, where his parents moved soon after his birth. Floyd married Donna Hiser on June 22, 1957, at First E.U.B. Church, Decatur. A homemaker, Donna was always beside him from the time they began dating in college through a marriage of almost 64 years. Floyd graduated from Millikin University in 1955 and the Evangelical Theological Seminary (now Garrett-Evangelical Theological Seminary) in 1958, where he received his Master of Divinity Degree. He subsequently earned his Doctor of Ministry from Boston University School of Theology in 1985.

A believer in ministry beyond the local church, he was active in councils of churches, ministerial associations, and various youth camps. His conference service included district committees of church location and building, conference health insurance committee, commission on equitable compensation, conference board of ordained ministry, and multiple terms as chairperson of the conference board of pensions. Service to the greater community included several years on Peoria’s Methodist Medical Center Board of Trustees. An active Rotarian for over four decades, he served as president of the Morton club.

His parents, John and Clarice Stradley, preceded him in death as did his brother, Cecil.

Visitation will be from 10 a.m. Saturday, July 10, until the 11 a.m. celebration of life service at Asbury United Methodist Church, 196 S. Harrison Ave., Kankakee.

Memorials may be made to Asbury United Methodist Church, Kankakee.