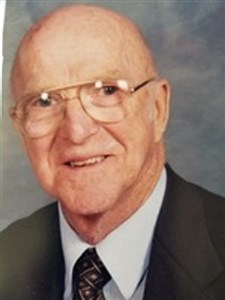 Henry J. Mauschbaugh passed away on Thursday, September 2, 2021, at Snyder Village in Metamora.

He was born to William J. and Martha Bailey Mauschbaugh on August 15, 1926, in East Peoria.

He was preceded in death by his parents and siblings, Martha, Ruth, Margaret, William, Mary, Betty Jane, Roland and Jacqueline.

Henry graduated from East Peoria High School. He entered the U.S. Army during World War II to serve in the K-9 Corp at Fort Robinson, Nebraska. After discharge, he returned home to East Peoria to work in carpentry. He soon realized his dislike for the outdoor winter work and enrolled in Brown's Business College in Peoria. After graduation, he began employment at Workingmen's Savings and Loan, where he met the love of his life, Norene. His career was in the savings and loan business before early retirement to serve in a finance position for his church. He was an active member of his community, involved in many civic organizations.

Henry was a long-time member at First United Methodist Church in Peoria. He served in many areas, including Sunday School teacher, Bible Study leader and lay ministry leader, to name a few. He was also very involved with Cursillo and Walk to Emmaus.

He loved to spend time with family on many vacations, which many included camping. He also enjoyed golf, swimming, walking his dogs and planning family outings, like seeing his favorite team, the Chicago Cubs.

During his last few years, he received wonderful care from the Assisted Living and Memory Care staffs at Snyder Village, for which he was extremely grateful. During the last month of his life, Compassus Hospice also cared for him. The family wishes express their appreciation for his care as well.

Family visitation will be held at Beck Memorial Home in Bloomington. Graveside services and burial will be at Springdale Cemetery in Peoria on Thursday. September 9, 2021, at 12:30 p.m.

In lieu of flowers, memorials may be made to the Alzheimer's Association or Snyder Village Resident Assistance Program.