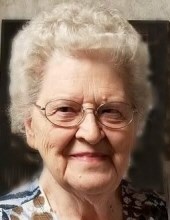 Mary Ellen Peabody, 94, of Pontiac IL passed peacefully on Sunday, Sept. 26, 2021, at Evenglow Lodge, Pontiac, IL. She was born Sept. 11, 1927, in rural Carman, IL, the daughter of Charles Walter & Marguerite Ellen (Vaughan) Howell. She was raised in Yates City, IL, where she graduated from high school and on Nov. 30, 1945, married Gordon Duaine Peabody. They raised a family of six children on Illinois farms for 25 years at Altona, La Prairie Center and West Jersey until Gordon and Mary Ellen went into the ministry together in 1970, with Gordon soon after being ordained a United Methodist minister. They spent many years pastoring churches in the Farmington and Flanagan areas and in Hillsdale until they retired to Pontiac where Gordon continued as visitation pastor with the Pontiac UMC Church. He went to be with Jesus July 30, 1999.

She played the piano from the time she was little, accompanied choruses in high school, organized kid’s choirs and played the organ for church. During their farming years she was very active in the WSCS women’s church group, Home Extension, 4-H and taught Sunday School. She was a wonderful seamstress and made a lot of kid’s clothes as well as her own. She and Gordon loved to play pinochle with friends. During their ministry years they were a part of Emmaus, many Bible studies, mission trips and Lay-witness weekends. They gave many testimonies of God’s healing miracle in their lives. Mary Ellen was called to speak on many occasions in the pulpit as a certified lay-speaker and was on many church committees.
She worked several jobs including Flanagan’s Good Samaritan Home. She held many offices as a past member of UMW, was still an active member of the DAR, Pontiac UMC and Bible study. She helped at the church senior-walk-ins, volunteered at Evenglow Chapel playing piano and loved playing cards there with family and friends.

One of her most memorable trips was to the Holy Land with Gordon when he baptized her in the Jordan River. She most of all loved traveling to be with family and chaperoning cousins’ trips.

Calvert & Martin Funeral Home, 413 N. Main St., Pontiac, will be handling the arrangements. A private family Celebration of Life will be held at the First United Methodist Church of Pontiac.

Inurnment of ashes will be at Rooks Creek Cemetery.

Memorials can be made to Livingston County Community Pantry in Pontiac, United Methodist Church of Pontiac or a charity of your choice.