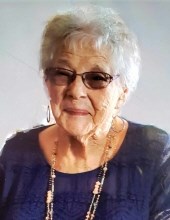 Vesta Lucille Morgan, 103, of Paris, Illinois, formerly of Westfield, Illinois, passed away at 8:55 a.m. Tuesday, October 5, 2021, at her residence. She was a devoted homemaker and minister’s wife.

For those who wish, the family suggests that memorials be made to the American Heart Association.

Services celebrating her life will be conducted at 12:00 p.m. Saturday, October 9, 2021, at Templeton Funeral Home in Paris. Burial will follow in Maple Hill Cemetery in Westfield, Illinois. Visitation will be from 10 a.m. until service time Saturday at the funeral home.

Please consider sharing a memory, photo, or condolence with Vesta’s family on her Tribute Wall at www.TempletonFuneralHome.com