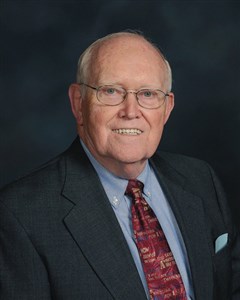 Jim dedicated his life to serving God and country. This was evident by the range and impact of his ministry outreach. He started his career as an ordained minister in the United Methodist Church, serving local churches throughout Southern Illinois for over twelve years. Jim then felt called to serve as a chaplain in the United States Air Force. He served for the next twenty years, including tours in North Carolina, Illinois, Michigan, England, Vietnam and Korea. Jim completed his Air Force career retiring in 1984 achieving the rank of Lieutenant Colonel. The Lord then led Jim to serve as the Director of Pastoral Care at Belleville Memorial Hospital which he did for over 17 years. During this time he became a Board Certified Chaplain by the Association of Professional Chaplains.

Jim graduated from Vienna High School in 1951, and was a co-founder of the Youth for Christ group. In 1955, he received a Bachelor of Arts degree from McKendree College. He went on to earn his Master of Divinity degree from Garrett Theological Seminary in 1960.

Jim is preceded in death by his:

He is survived by:

Jim was a man of quick wit with deep love and commitment for his family. He enjoyed spending time each summer at Beulah Holiness Camp. Beulah is a place near and dear to his heart as it was at the altar at Beulah where he was called to the ministry.

Memorials: As an expression of sympathy and in honor of Jim’s life, memorial donations may be made to Beulah Holiness Camp in Eldorado, IL.