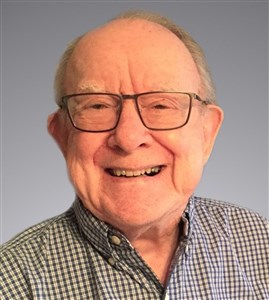 Claude served in the US Navy Reserves during World War II. He was a minister for the United Methodist Church for 42 ½ years, serving East Peoria, Delavan and Washington, until retiring on December 31, 1992. He also served 8 ½ years with the Preachers’ Aid Society as Associate Executive Secretary. After retirement, he volunteered with Habitat for Humanity and the American Red Cross in Decatur. He was an active proud member of Golden Kiwanis.

Claude moved from Decatur in 2017 and lived at Villas of Holly Brook in Morton, until moving to Lutheran Hillside Village in Peoria.
Claude was a humble man who lived his life as an exemplary role model. He was tolerant and non-judgmental of others because “God is bigger than that.” He enjoyed talking to people and asking questions about their life experiences. He never met a stranger.
Claude loved the Cubs, the Bears, and the Ohio State Buckeyes, and when he was able, he enjoyed playing golf.
Cremation rites will be accorded. A Celebration of Life will be held at a later date.

In lieu of flowers, memorials may be made to The Preachers’ Aid Society and Benefit Fund, PO Box 19207, Springfield, IL 62794.
Knapp-Johnson Funeral Home and Cremation Center in Morton is handling arrangements.

To leave an online condolence for the family, visit www.knappjohnson.com.