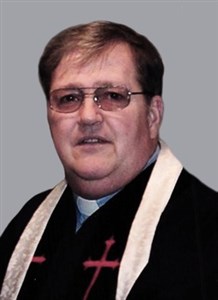 Jon was born on December 1, 1949 in Salem, the son of Merle and Vivian “Peggy” Kline. He married Linda Elaine (Leidner) Kline on December 7, 1969 in Pleasant Mound and she preceded him in death on December 1, 2006. He is survived by two sons, Jon Wesley Kline and wife Fleshette of Arcola, and Stephen Calvin Blair Kline and wife Connie of Lerna; grandchildren, Michael Stephen Kline, Amelia Elaine Kline, and Kaitlyn Elizabeth Kline; two sisters, Gayle Clark of Neptune Beach, FL and Susan Smith of Kinmundy; two brothers, Brian Kline and wife Tracey of Tucson, AZ and James Kline of Salem; and several nieces and nephews. He was preceded in death by his parents; wife; one brother, Gary Kline and wife Barbara; and two brothers-in-law, Mel Clark and Keith Smith.

on was a United Methodist Pastor for over 20 years and attended the Kinmundy United Methodist Church. After his retirement from full time ministry, he served as a prison chaplain for many years. He enjoyed traveling, pistol shooting at the range, at one time enjoyed raising bees and harvesting honey, and most importantly, spreading the gospel.

Jon was a member of the Elks and had served in the United States Navy.

Funeral services for Jon D. Kline will be held at 11:00 am on Monday, January 10, 2022 at the Kinmundy United Methodist Church with David Gilley officiating. Burial will be in Evergreen Cemetery. Visitation will be held on Sunday from 3:00 pm until 5:00 pm at Crouse Funeral Home in Salem and again on Monday from 10:00 am until the time of the service at the church. Memorials can be made to Full Armor Christian Academy and can be left at Crouse Funeral Home who is assisting the family. Online condolences can be left at www.CrouseFH.com