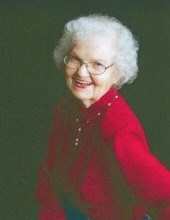 Lily "Ann" Browning, 90, of Springfield, died at 2:46 a.m. on Friday, January 21, 2022, at The Bridge Care Suites.
Ann was born February 9, 1931, in Golden Gate, IL, the daughter of Alan B. and Emily A. Inskeep Gill. Her children, grandchildren, and others were entertained by Ann's stories of her experiences growing up in Southern Illinois, from farm adventures with her younger brother, Paul, to their encounters with the "Shelton Boys". Ann graduated from McKendree College, where she met and married William "Bill" Browning on June 23, 1952, in Fairfield, IL; he preceded her in death on June 6, 2018.
During their 66 years together, Ann and Bill traveled from the Arctic Circle to Antarctica, and more than 50 countries in between. Demonstrating what her family called her "spunk", she walked the Great Wall of China, crossed the ice to visit penguins, and enjoyed her time of being "tall" in the crowded streets of China. Ann was active in the churches they served in Worden, Plymouth, New Boston, Maquon, Keithsburg, Silvis, Beardstown, Kankakee, Monticello, and Monmouth, Illinois. She regularly taught Sunday School and served in several roles in the United Methodist Women both in her local church and beyond. Ann spent many years teaching in elementary school and was an active member of P.E.O.
Ann is survived by her children, Patricia (John) Jamison of New Berlin, Deborah (Donald) Lundberg of Salem, OR, and William (Linda) Browning of Conifer, CO; five grandchildren, Tricia (Michael) Kinner of New Berlin, Brandon (Becky) Feicho of Round Rock, TX, Melissa (Chris) Dundov of Bloomington, Katie (Jacob) Gutierrez of Algonquin, IL, and Diana Browning of Diamond Bar, CA; great-grandchildren, Benjamin and Emily Kinner, Lily, Timothy and Jason Feicho, Logan and Ava Gutierrez, and Aubrey, Isabelle, and Connor Dundov; brother, Paul (Janet) Gill of Bloomington; and several nieces and nephews.
She was also preceded in death by her parents and niece, Lori Gill-Conner.
Cremation was provided by Lincoln Land Cremation Society.
Burial will be held at a later date.