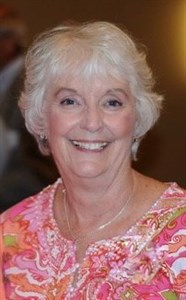 Visitation will be from 11 a.m. to noon Thursday, March 3, at the Morgan Memorial Home, 1304 Regency Dr. W, Savoy. Funeral service will follow at 1 p.m. The family requests that everyone attending wear a face mask while inside the building.

Mrs. McGuire was born Feb. 9, 1941, in Champaign, the daughter of Charles W. Clabaugh and Eleanor Knoll Clabaugh. Following her mother’s early death, she was raised by her father and stepmother, Louise (Zimmerman) Clabaugh, in Champaign.

She married the Rev. Richard McGuire on June 23, 1962, at the First United Methodist Church in Champaign. Her husband of nearly 60 years survives.

Also surviving are her daughter, Donna Pepper of Loda; her son-in-law, Cam Pepper; her grandchildren, Taybor (Haley) Pepper of Dexter, Mich., and Sloane Pepper of New York, N.Y.; her sister, Patsy Swaino, of Copley, Ohio; and a niece, nephews and special cousins she treasured.

She was preceeded in death by her parents and her in-laws, Harold and Margaret McGuire of Champaign.

Mrs. McGuire graduated from Champaign High School in 1959. She earned the following degrees from the University of Illinois: bachelor’s of arts in 1974, master’s of science in 1977 and master’s of social work in 1982.

Her consistent dedication as a United Methodist minister’s wife was evident in each church she and her husband served. In 1974, she began as a social worker at the Community Resource & Counseling Center (CRCC) in Paxton, providing counseling as well as consultant work with countywide nursing home facilities. In 1980, she opened a private counseling center in Urbana — the Center for Creative Communication. Her business evolved into a training and consulting firm emphasizing business processes and leadership development, and teaming. She was a national public speaker and trainer. In 1997, she became a civilian employee at the United States Army Corps of Engineers at CERL in Champaign, providing her skills in facilitation, teaming and organizational development. She retired in 2012.

Among her professional awards, she received the Department of the Army Commander’s Award for Civilian Service in 2000 and its Superior Civilian Service Award in 2005. She appeared as an expert guest on “The Phil Donahue Show” and “Hour Magazine” with Gary Collins. She was involved in numerous organizations during her career. She held seats on the board of directors at the Paxton Community Hospital and Salt & Light Ministry and served numerous committees with local chambers of commerce, Parkland College, the University of Illinois and many local mental health and women in business initiatives.

Mrs. McGuire was deeply involved in each community she and her family resided in throughout Central Illinois. She was an advocate for mental health, clergy wives, women and senior citizens especially. Her work ethic, intelligence and kindness were felt by all who met and knew her. Her family and community will deeply miss her.

Appreciation for her excellent care goes to all the staffs at Bridle Brook Assisted Living & Memory Care in Mahomet, Accolade Healthcare on Pells in Paxton and Transitions Hospice.
Memorial donations can be made to Cunningham Children’s Home, the Preacher’s Aid & Benefit Fund or an Alzheimer’s organization of the donor’s choice.

Condolences may be offered at www.morganmemorialhome.com.