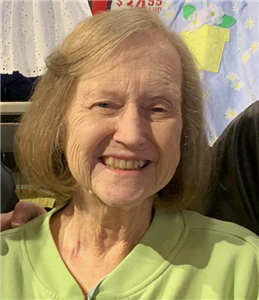 Betty was born to the late Fred and Lucille Chatman on Feb. 10, 1942, and grew up in the Elk Creek/Taylorsville, Ky., area on a dairy farm. She learned many lessons on the farm, including the value of hard work and also to take the emergency brake off the Studebaker truck when bailing hay, perhaps learning the hard way that it might catch on fire.

After graduating high school in Taylorsville, she chased a dream to go to college, becoming the first in her family to do so by graduating from Georgetown College in Kentucky. While at college, she met the love of her life, James (Jim) O. Mahaffey, at the school’s library, where she always told her kids that she was only there to study. Betty and Jim married shortly after her graduation until his death in 2011, and they had four sons.

Betty was blessed to find joy in many things throughout her life. She taught elementary school, helped her boys by being a den mother in scouts and actively supporting the boys' many endeavors when they were growing up. Betty painted pictures and loved doing arts and crafts. Betty also felt the calling to be a United Methodist minister and graduated seminary after being out of school for over two decades. Pastor Betty served churches in central and southern Illinois, where she enjoyed sharing, talking and counseling parishioners over the years. After her retirement in 2007, Betty returned with Jim to the family farm she loved and where the foundation for her beliefs began. When Jim died in 2011, Betty traveled to see her children in Illinois for extended periods of time and eventually relocated to be near her boys and their families. Betty truly loved spending time with her family and grandchildren and great-grandchildren.

Betty’s survivor’s include four sons, Kenneth A. Mahaffey (Sidonna) of Morrison, Jonathan M. Mahaffey (Kimberly) of Homer, Christopher L. Mahaffey of Decatur and David O. Mahaffey (Becky) of Illiopolis; and was blessed to have 17 grandchildren and seven great-grandchildren. Betty loved her sister, Martene McKinney, and brother, Freddy Chatman (Devra), and many nieces and nephews.

A family memorial service will be held in Kentucky at a later date as Betty will be laid to rest with her husband, Jim.

In lieu of memorials, the family suggests making a donation to St. Jude Children’s Research Hospital or another cancer research/support facility in her name.