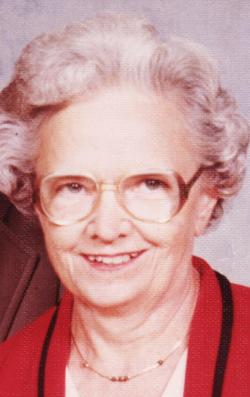 She was a 1935 graduate of Springfield High School where she was a member of the National Honor Society. She enlisted in the U.S. Navy in January of 1943 and served in Washington D.C. as a typist-stenographer for the Joint Chiefs of Staff. She was a Braille transcriber at the National Braille Press and attended the Christiansen Choral School master course in choral direction. She was a member of Laurel United Methodist Church where she organized and ran the church library. Edna loved church, reading, quilting, knitting and sewing.

Friends may call Thursday July 24, 2014 from 4 to 7:00 PM at Laurel United Methodist Church, Springfield. Additional visitation will be on Friday July 25, 2014 from 10:00 AM until the time of services at 11:00 AM at the church with Rev. Kent Lolling officiating. Following the services a meal will be served at the church with interment to follow at Bethel Baptist Cemetery, Edinburg. Memorial gifts may be made to the National Federation for the Blind. Boardman-Smith Funeral Chapel is in charge of arrangements (www.boardman-smith.com).