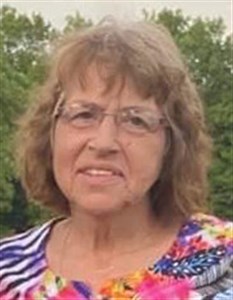 Deborah M. (Brown) Cogdill of Allendale, Illinois was called to her eternal life with Christ on December 30, 2022 surrounded by her family. She was born on January 8, 1955 to the late Harold and Velma (Bowman) Brown. On April 3, 1982, she married the love of her life, David, who survives.

Debbie was not only a wonderful wife to David, but also a loving mother and mamaw. She took pride in her daughters, Sarah and Elizabeth, and told many about their accomplishments in life. Her love for her sons-in-law, Andy and Joel, was shown through all the special treats she would make them just because they would mention something sounding good. However, she was most proud of her grandkids: Hallie, Isaiah, Summer, and Ava. They were able to talk their mamaw into almost anything, and she will be missed in their continued adventures.

Anyone who met Debbie, knew how much she loved and trusted the Lord. Throughout her life, she continued to show her faith and witnessed to others in many ways. She spread her joy by baking for others (especially her famous sugar cookies) and sharing her garden produce and canning products, as well. She would regularly help others who were unable with cleaning and outside jobs, too. Debbie was a member of the Allendale United Methodist Church in Allendale, Illinois, but regularly attended the Pinkstaff United Methodist Church and Chauncey-Landes United Methodist Church with David as a devoted preacher’s wife. She loved all of her church families dearly.

Debbie enjoyed several things in life: baking, gardening, canning, fishing, being outdoors, taking walks with her grandkids and beloved dog, Dakota, taking care of all her kitties at home, and making sure everyone else was taken care of before herself. Debbie continued working with her brother, Dennis, at Brown’s Plumbing Supplies until her final days.

Funeral services will be conducted on Wednesday, January 4, 2023 at 12:00 PM CST at the Emmons-Macey & Steffey Funeral Home in Lawrenceville, Illinois. Visitation will be on Wednesday from 10:00 AM until the service hour of 12:00 PM CST at the funeral home. Burial will be in the Allendale Cemetery. Memorial donations may be made to the Lawrence County Cancer Resource Center & Wig Shoppe.