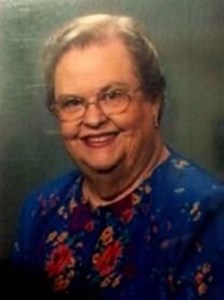 Betty-Jo was born on September 10, 1933 in Gainesville, FL, the daughter of Robert Reece and Christine Medlock Brabham. She graduated from Gainesville High School and Massey Business School in Jacksonville, FL.

On November 21, 1951, she married Carl Richard Hendry in Gainesville. For nearly 40 years, she partnered with Carl, an ordained minister, in serving churches in the Florida and Central Illinois Conferences of the United Methodist Church. Carl passed away on September 8, 1995.

She is also survived by two sons and their families: Richard and Robin Hendry of LaSalle, IL, and their children Greg (Megan) Hendry and Amanda (Chris) Moss; Ted and Donna Hendry of Greenville, SC and their children, Leah and Reece. Surviving also are two brothers and their wives, Bennie (Vicki) Brabham of Keystone Heights, FL and George (Betty) Brabham of Gainesville, and a sister-in-law, Eula Brabham of Starke, FL. She was predeceased by her parents and two brothers, Rev. John Brabham and Reece Brabham.

A graveside service will be held Saturday, September 5, at Forest Meadows East Cemetery in Gainesville.