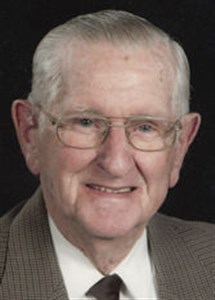 His funeral will be at 10:30 a.m. Thursday at Grace Church, Normal. The Rev. Len Thebarge will officiate. Visitation will be from 5 to 7 p.m. Wednesday at the church. Calvert & Metzler Memorial Home, Bloomington, is handling arrangements.  Interment will be in Mount Joy Cemetery in rural Armington. Military rites will be performed.He was born Nov. 1, 1926, in Morristown, N.J., to Vernon and Frances McConnell Garabrant. He married Irene McIntyre on July 7, 1946, in Sparland. She survives.

He was preceded in death by his parents; one brother, Harold; and one sister, Mildred Murphy.

He served his country proudly during World War II in the U.S. Navy Air Corps, and he was privileged to participate in the Honor Flight to Washington, D.C., in 2009. Dick graduated from Monmouth College and then from Evangelical United Brethren Seminary in Naperville. He is a member of Grace Church in Normal and also the local Veterans of Foreign Wars and American Legion. He belonged to the local retired Methodist pastors' group, ROMEO. Dick was a pastor for 28 years in Methodist churches in Central Illinois. During his retirement, he was a tax preparer for H&R Block and also worked as a handyman in Central Illinois.