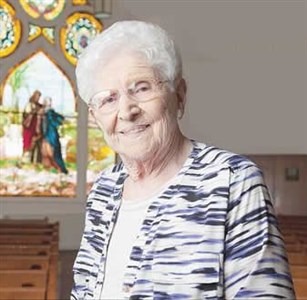 Visitation for Mary White Renfro, 99, of Lebanon who passed away Monday September 28th, will be held
3 to 7 p.m. Thursday October 1st  and 9 to 10 a.m. Friday October 2nd at First United Methodist Church, Lebanon. Funeral 10 a.m. Friday at the church. Burial in College Hill Cemetery. Meyer Funeral Home, Lebanon is in charge of arrangements.

Mary White Renfro was born and raised in Washington DC. She was a kindergarten teacher there for 15 years.  Mary was the first in her family to receive her Master’s degree, which was in Early Childhood Education from George Washington University in 1942.  She came to Illinois in 1957 with her husband Lamar who was the Director of Ground Safety for the Air Force at Scott AFB.

When Mary came to Illinois she continued her teaching career, teaching kindergarten from 1961 until 1983 in Lebanon, as well as in the education department at McKendree College, and Early Childhood Education Department at SIUE.

In 1979 Mary founded a preschool/day care in Lebanon. She continued to serve on the Board and in 1983 she began providing the music for the children 3 days a week. She also provided music at 2 other preschools, and 6 kindergarten classes, all in one day, once a month.

In 1996 Mary was elected president of the Illinois Great Rivers Chapter of United Voices for Children, where she served until 2004.

Mary has also served as a Dean and teacher for School of Christian Missions, is a member of the Bishop’s Initiative on Children & Poverty, served as chairperson of Annual Conference for Bishop Woodie White, and has served on the nominations committee for the Illinois Great Rivers Conference for 6 years.

Gifts in memory be given to the IGRC childcare agencies or to a local childcare program in you area.
Mary Renfro was honored for her many years of dedicated service to children at the Annual United Voices for Children Breakfast at Annual Conference on June 11, 2004. She was given a plaque with the inscription, “Women should be tough, tender, laugh as much as possible, and live long lives”, Maya Angelou.  Memorials can also be sent to Lebanon First UM Church, Mary's home church. H.E.L.P. for Mom, the daycare that Mary started in Lebanon, or the Lebanon Rotary, trying to raise money for dictionaries for Lebanon Schools.  All gifts may be sent to Lebanon First, 603 W Saint Louis St., Lebanon, IL 62254.  Please mark clearly where you would like your gift to go.