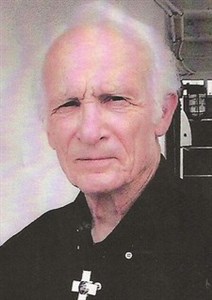 He was preceded in death by his parents; one great-granddaughter, Jami Elizabeth Tankersley; one brother and two sisters.

He was a World War II Navy veteran.

A graduate of Bridgeport Township High School, Dick attended Vincennes University and Greenville College.  He graduated with his Bachelor’s degree from MacMurray College and earned his Master of Divinity degree from Garrett-Evangelical Theological Seminary in 1968.

Pastor Seed was an ordained Elder in The United Methodist Church and served churches in Pinkstaff, Coffeen, Murrayville, Greenfield, LaPrairie Center, St. Joseph, Springfield, Mt. Pulaski, Bonfield and Delavan, retiring in 1993.  In retirement, he was called back to pastor 10 months in Manito and for 10 years at Mt. Pleasant and retired a second time in 2003.  He also had worked as a courier for First American Title Insurance Company in Pekin with his daughter Cyndy.

Pastor Seed loved his family and was proud of each one of his children.  He enjoyed woodworking and was an avid reader, even studying and learning Hebrew.  He also liked astronomy and had spent 5 years building his own telescope.

He was a member of Grace United Methodist Church in Pekin.

His memorial service will be at 11 a.m. Tuesday, October 6, 2015 at Grace United Methodist Church in Pekin.  Rev. Mary Kathryn Pearce and Rev. Gary L. Ford will officiate.  Visitation will be from 9:30 to 10:45 a.m. Tuesday at the church.  Inurnment will be in Camp Butler National Cemetery in Springfield at a later date.

Arrangements are by Preston-Hanley Funeral Homes & Crematory in Pekin.

In lieu of flowers, memorial contributions may be made to Grace United Methodist Church for the Sustaining God’s Grace Building Fund, 601 North 4th Street, Pekin, IL 61554.