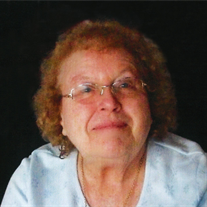 Lilian M. Burnett, 88, of Hanna City, passed away at 11:30 a.m. Tuesday, Jan. 19, 2016, at Apostolic Christian Restmor in Morton.
She was born March 7, 1927, in London, England, to George and Amy (Wiggins) Lambert. She was a war bride marrying her husband, the Rev. Clarence A. Burnett, Jr. on May 20, 1945, in Ipswich, England, during World War II. He preceded her in death on Dec. 29, 2002. She also was preceded in death by one sister.
Surviving are one son, John (Ann) Burnett of Normal; one daughter, Janet (Bob) Nichols of Pekin; three grandchildren, Brooke (Chris) Laughary, Penny (Jeff) Miller and Sara (Nick) Curran; and three great-grandchildren, Savanna and Jordan Miller and Sophia Laughary.
She graduated in 1971 at the age of 42 from Bradley University with her degree in Elementary Education.
Lilian taught Kindergarten for 21 years at Hanna City Grade School, retiring in 1992.
She was a member of various central Illinois United Methodist churches, where her husband served as pastor. She also was a member of the Hanna City American Legion Post 212 Women’s Auxiliary.
The family would like to thank the nurses and staff at Apostolic Christian Restmor for the compassionate care of their mother.
Cremation will be accorded. Visitation will be from 10 to 11 a.m. Saturday, Jan. 30, 2016, at Knapp-Johnson Funeral Home and Cremation Center in Morton, followed by a memorial service at 11 a.m., with the Rev. Raymond Harrison officiating. Burial of the cremated remains will be in Texas Union Cemetery in rural Trivoli at a later date.