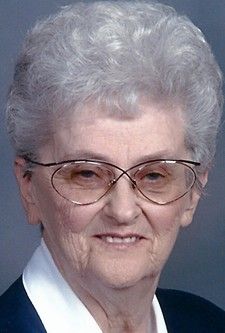 She was born Thursday, June 23, 1927, in Jefferson County, the daughter of Claude N. and Lula E. (Phillips) Piercy.

Rosemary attended Asbury College in Wilmore, Ky.; she completed Seminary Equivalent by correspondence. She was an ordained minister in the United Methodist Church, served as pastor of Dix-Union Chapel United Methodist Church and was associate pastor of First United Methodist Church in Mt. Vernon. She was a member and past vice president of Mt. Vernon Woman’s Club and was a member and served on the board of directors of the Mt. Vernon Business & Professional Women. She was a member of Jefferson County Ministerial Association, Christian Woman’s Club, was a past vice president and past president of Church Women United of Jefferson County and was a member of the Chamber of Commerce, Advisory Committee Christian Counseling Center. She served as coordinator of church activities for American Cancer Society, was an available and active in counseling outside the local parish, was a recipient of Comprehensive Services “Help Those In Need” award, was 1979 Jefferson County Woman of the Year, 1980 Diana Award from Epsilon Sigma Alpha Sorority and was presently serving as chaplain of Alpha Iota Sorority of Epsilon Sigma Alpha. She was past and the first woman chairman of Annual Conference Program Committee, was chairman, conference committee on Adult Ministries and was a member of the following: the board of Higher Education and Campus Ministries, Committee on Episcopacy, Bishop’s Task Force on Young Adult Ministry and National Organization of Clergy Women. She was secretary and member of the District Committee on Ministry, was a certified Laboratory Leader-Training for Leadership member, District & Conference Council on Ministries member, was on the Board of Global Ministries member, was on the Southern Illinois Chapter Christian Educators Fellowship Board of Directors and was President of the Board for six years and was a member of United Methodist Village of Lawrenceville and United Methodist Children’s Home Committee which established Webb Continuing Education. She was an active speaker at all types of organizations and functions, was awarded the most highly prized, “Mother of the Year” award from her daughter. She became an Ordained Elder in 1966 and was presently serving as BPW Education & Foundation Trustee on Global Awareness.

She was preceded in death by her parents; her brother, Harl Piercy; and three sisters, Dorothy Smith, Alma Yeargin and Muriel Wooters.

Funeral services will be held at 10 a.m. Thursday at First United Methodist Church in Mt. Vernon with the Rev. John Hamilton, the Rev. Victor Long and the Rev. Bud Storey officiating. Interment will be at Old Shiloh Cemetery in Jefferson County.

Visitation will be held from 5 to 8 p.m. Wednesday at Hughey Funeral Home in Mt. Vernon.

For those who wish, memorials may be given to Angels on Assignment and will be accepted at the funeral home or mailed to Hughey Funeral Home, P.O. Box 721, Mt. Vernon, IL 62864.

Arrangements have been entrusted to the care of Hughey Funeral Home where you may call 242-3348 or visit www.hugheyfh.com for further information and to send condolences.