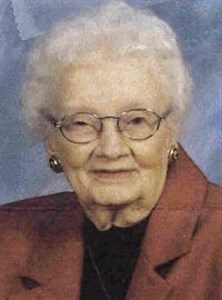 Anna Curtis, 103, of Birmingham, Ala., passed away Thursday, July 1, 2010 at the Fair Haven Retirement Community in Birmingham.

Anna was born February 21, 1907 in Margaret, Alabama to Robert and Martha (Leslie) McMeekin.
She married John R. Curtis, formerly of Royalton, Illinois November 16, 1925 in Birmingham. He preceded her in death May 1, 1980.

Mrs. Curtis was a member of the Genesis United Methodist Church in Leeds, Alabama and a homemaker.
Funeral services for Mrs. Curtis will be held at 11:30 a.m., Saturday, July 10, 2010 at the Miners Cemetery east of Royalton with Reverend John R. Curtis, Jr. officiating. Visiting hours are from 10 to 11:00 a.m., Saturday at Vantrease Funeral Home in Royalton.