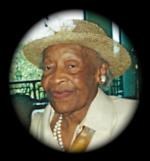 Justine Louise Tunstall was born on March 31, 1918, in Tulsa, Oklahoma to Ben Harrison Grigsby and Louise Dollie Morgan. She was the eldest of three children and was preceded in death by her sister, Charlotte Grigsby. Justine was raised in Wichita, Kansas. She graduated from high school and attended Wichita State University, earning a Bachelor of Science. She met and married her husband, Reverend John Edward Tunstall. God blessed this union with two beautiful daughters, Dwyla Justine and LaTanya Cecilie. She started her graduate studies at Drake University before the family moved to St. Louis, Missouri. Justine worked as the Administrative Assistant to the Department of Education at Washington University. For the time period, she was one of few black women who worked at the university in such a prestigious position. She used the opportunity to complete her graduate studies, and she obtained a Masters Degree in Education from Washington University. She then transitioned into one of her life’s greatest passions: teaching and guiding young children. She taught elementary school in the St. Louis Public School System for over 40 years. Throughout the years, Justine devoted her life to her family, church congregation, and the local community. She was a leading member in the ACME Art and Culture Club, an association dedicated to studying and celebrating positive Black American females in art and literature, as well as African culture. She sang in the St. Louis Symphony’s Community Choir. She directed the children and youth choirs at the various churches her husband pastored. She opened her home to countless African exchange students. Eager to learn about different cultures, she traveled around the world, visiting Liberia, China, Germany, Italy, Switzerland, France, Russia, and the Holy Land. On September 24, 2010, Justine was called to God’s Celestial Heaven, joining her husband. She leaves behind a legacy of loved ones including: her daughters, Dwyla Justine Walker and LaTanya Cecilie Tunstall-Robinson; her brother, Bennie H. Grisgby and her sister-in-law, Margaret Grigsby; her sons-in-law, Kwesi O.J. Akpore and Rodney Robinson; her grandchildren, Walter Alfrin Walker III, John Michael Walker, Jihan Elearah Walker and Nasebo Amara Robinson; her granddaughter-in-law, Sadia Walker; her great-grandchildren, Jade Nicole Walker, Kacey Colette Walker, Allison Marie Walker and Victoria Celeste Walker; a host of other nieces, nephews, family and friends. Her beauty, grace, sense of humor, frank honesty, and deep abiding faith has shaped our lives forever. Although she will be greatly missed, her extraordinaryspirit returns to God. May she rest in everlasting peace.