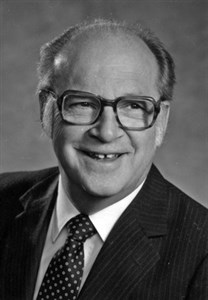 Gary Fritz, age 87, died peacefully on Sunday, April 22, 2012 at Agrace HospiceCare, surrounded by his family. Gary loved people. He knew no boundaries, geographical or personal. He spent his life putting love into practice through service to others and through the joy of being with others. He loved to read, particularly theology and political/social issues, and he delighted in prodding others into discussing these with him.

Gary Gruber Fritz was born to Lester and Margaret (Gruber) Fritz on May 26, 1924. He was born and raised in Belleville and was drafted into military service in World War II during his freshman year in college. He served for three years in the 178th Army Ordnance Company in Europe. The destruction and suffering which he witnessed led him to embrace pacifism, and he decided to spend his life in Christian ministry rather than chemical engineering.
He had saved his money during the years of military service and after the war spent it serving with the Quakers for a year as a full-time volunteer in an institution for mentally ill people, followed by six months in Finland helping the Finnish people to rebuild their homes, which had been destroyed when the Germans retreated with a “scorched earth” policy.

Gary met Mary (Hartzell) at a Methodist Student Movement conference in the fall of 1948. They became engaged when they saw each other again in December and were married a week after his graduation from the University of Wisconsin in June 1949. They both earned graduate degrees at Garrett Theological Seminary and Northwestern University. During this time Gary served the Brandon Methodist Church in Brandon, WI as a student pastor. They had three children, David, Mary Margaret, and Gary Nathan.

When Gary and Mary graduated in 1955 they were assigned as missionaries to the Methodist Church in La Paz, Bolivia where they worked at the Instituto Americano. Gary was a teacher and helped the teachers organize a housing cooperative. He was greatly loved by students and staff. He became principal of the high school, then director of the school. He simultaneously served as pastor to The Redeemer and The Resurrection Methodist Churches in La Paz as well as district superintendent. During these years he and Mary had three more children Cathryn, Heidi, and Christina..

During a furlough Gary earned a doctorate in education from the University of Illinois. In 1970 he was transferred to Santiago Chile to direct the Methodist school there. The family returned to the U.S. in 1973, and Gary became professor of education at Blackburn College in Illinois, then served the Bilingual Education Office of the Illinois State Board of Education. In 1977-78 he was a Fullbright lecturer and worked with graduate programs and students in Mexico City. He then returned to the pastorate and served churches in Pawnee, Homer, and Champaign, Illinois before retiring.

In retirement Gary and Mary purchased Gary’s family’s homestead in the Town of Montrose, Dane County, Wisconsin. He returned to Grace United Methodist Church where he had been raised and where he had served briefly as pastor. He enjoyed and was active in the church. He also looked forward every week to being with his friends as Downtown Madison Kiwanis.

Memorial gifts may be given to the Youth Mission Fund at Grace United Methodist Church, a fund that he and Mary started several years ago to help young people of the church to serve in overseas mission projects.

Special thanks to the staff of Agrace HospiceCare for their care and compassion.