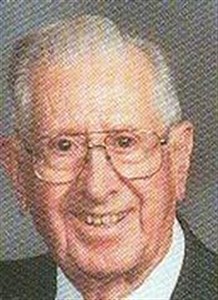 Funeral services will be held at 11:00 AM, Monday, September 24 at the First United Methodist Church in Galva. Rev. Ann Champion will officiate. Visitation will be held from 3:00-5:00 PM, Sunday, September 23 at Rux Funeral Home in Galva. Burial will be in East Linwood Cemetery in Galesburg. Memorials may be directed to the First United Methodist Church.

He was born January 10, 1918 at his home in Springfield, OH, the son of James Elmer and Martha Ann (Harris) Hancock. He married Datha McClish in Dupont, OH and she preceded him in death on June 5, 1979. He later married Minerva Hanson on April 12, 1980 in Galva. She survives, as do a son-in-law, Harold Sloan of Cameron, IL, a step-son, Arnold (Doris) Hanson of Galva, a step-daughter, Diane (John) Conner of Galesburg, eight grandchildren and nine great grandchildren. He was also preceded in death by his parents, a daughter, Joy, a step-daughter, Carol and three sisters.

Rev. Hancock graduated high school from New Moorefield, OH in 1936. He attended God’s Bible School in Cincinnati, OH, Owosso College in Owosso, MI, University of Illinois extension classes in Robinson, IL, University of Cincinnati in Cincinnati, OH and graduated from Greenville College in Greenville, IL in 1958 with a Bachelor’s of Science Degree in Education and from Garrett Seminary in Evanston, IL in 1963 with a Masters of Divinity Degree. Pastorate James had served Pilgrim Holiness Churches in Onarga, IL and Oblong, IL, Pilgrim Holiness and Community Church in Cincinnati, OH. He also served United Methodist Churches in Oconee, Ohlman and Fairview Circuit, Springfield, IL, Canton South Park and Monterey, Stonington and Grove City, IL, Joy, Eliza, New Boston, IL, the First United Methodist Church in Galva, the Champaign First Church and in Spring Bay, IL, retiring in 1983. During his retirement he filled in many area pulpits for absences and served 2 and a half years at the Neponset Congregational Church. James held many church conference positions, such as Leadership Education and Training, Lay Speaker Advisor, Conference Adult Coordinator, Health and Welfare Committee and Program and Expense Fund Committee. He was always active in whatever community his current church was in. Most recently his member ships included the Galva Lions Club, Galva Ministerial Association, the First United Methodist of Galva and the Retired Minsters Association.