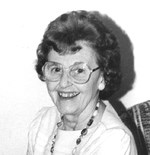 HERRIN - Irene "Rene" Childers Frick, 90, died on Monday, Dec. 16, in Indianapolis, where she had been living with her family.

Rene was a musician, writer, Kentucky Colonel, and friend to hundreds of people who will miss her dearly.

She and her husband, the Rev. Jack Frick, served United Methodist churches in Kentucky, Indiana, Colorado, and Southern Illinois, where they enjoyed years of service at Hutsonville, West Frankfort, Benton, Carmi, and Greenville. Rene was widely known and loved for her piano playing. She was a regular call-in guest on KMOX Radio's Jim White show, where she played requests from listeners. Thirty-six hours before her death, Rene took her arm out of a sling and let loose with a medley of catchy gospel tunes, to the astonishment of onlookers and nurses at her health care facility. But it was no surprise to her family, who knew that Rene had played for thousands of church services, revivals, weddings and funerals.

Irene was the youngest of four children, born to Pearl and Henry Childers on Dec. 29, 1921, in Herrin. When she was 10 years old, she ran errands for a neighbor who agreed to give her piano lessons for "a nickel a lesson," a phrase Rene later used as the title of her memoirs published in 2003. She was a graduate of Herrin High School. After marrying Jack Frick, Rene lived the vagabond life of a preacher's wife, with stints in parsonages that also hosted ants, mice, and even a bee's nest in one pastorate! While living in Mount Vernon, she was employed as a stenographer for the State of Illinois. She retired in 1988 and moved to Wilmore, Ky.

Rene loved Wilmore, and Wilmore loved Rene. She especially enjoyed playing the piano every week at Thompson-Hood Veterans Center. Even the governor noticed her dedication, and in 2000 declared her a Kentucky Colonel. Meanwhile, Rene released four audio cassettes of her piano playing, "Old Time Religion," "Do You Remember?," "Merry Christmas," and "Rene Frick Plays for her Friends."

Besides her published memoirs, Rene wrote feature stories for several publications in Kentucky and authored a weekly column titled Musing Memos for the Greenville Advocate from 1974 to 2006. In her later years, she maintained correspondence with hundreds of friends and continued to volunteer playing the piano at nursing homes until three weeks before her death.

Rene was preceded in death by her parents and sister, Helen Brown.

Memorials may be made in Rene's name to the Beulah Holiness Camp Association, c/o David Cole, 1710 Oakshire Road, Marion, IL 62959.