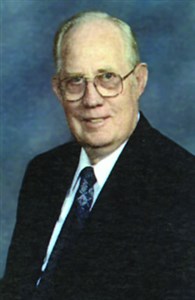 The Rev. Earl Robert Black, 79, who served 41 years as a United Methodist Church pastor, died in his sleep Sunday, Oct. 28, 2012. He was suffering from cancer.

One of seven children, he grew up on a farm near Patoka. He began preaching after receiving his local preaching license at age 15.

He was a dedicated Christian who loved God and tried to exemplify the teachings of Christ in his daily life. He truly believed in a God of love, forgiveness, justice and mercy.

A man of compassion, who loved his wife, children, grandchildren and his extended family, enjoyed helping others and working with church youth groups. He was an avid Saluki fan, attended games when his grandchil-dren played, and watched sports on television. He enjoyed puzzles, problem solving and working outside in the yard, particularly in the fall.

He was genuine, sincere, generous, caring and supportive, with a vibrant sense of humor. His sense of humor extended to his taste in music. He taught his family to sing "The Auctioneer Song," "I'm My Own Grandpa" and "That Good Old Mt. Dew."

In addition to singing the auctioneer song, he really did auction occasionally. Earl loved to sing gospel and western music, especially in a quintet that included his daughter, Melanie, and his grandson, Cameron.

In fact, he was singing "Peace in the Valley" in McKendree College Chapel when his voice caught the attention of a fellow student, Benita Kathyrn Emmons. Eighteen months later, Aug. 25, 1953, they were married.

While at McKendree College, he served as a student pastor at Lessie Bates Davis Neighborhood House in East St. Louis.

After graduating from McKendree in 1955, he moved to Atlanta to attend seminary at Emory University Candler School of Theology, graduating in 1958. He served two local churches in the North Georgia Confer-ence while at seminary.

He was a United Methodist Church minister and served as pastor in the Southern Illinois communities of Grand Tower, Gorham, Jonesboro, Walnut Grove, Mounds, Carterville, Stiritz, Hurst, Metropolis and Marion First. After he retired to Massac County, he served as an interim pastor to St. Stephen's Lutheran Church. He continued to preach when needed locally at churches in various denominations.

Earl was committed to and continued to serve as an advocate for ministers who had had complaints signed against them. As an associate in advocacy, he represented more than 30 ministers throughout the U.S., at times proceeding to take cases before the judicial council, which is the supreme judicial body of the United Methodist Church. He found great satisfaction in bringing healing to churches and to individuals.

In his younger years, Earl and his family of five traveled throughout North America. They explored nearly every state and national park while staying in a pop-up camper. After the children were grown and in retirement, he and Benita continued to enjoy traveling, venturing to Alaska, Hawaii, Europe, South America and northern Africa.

He was preceded in death by his parents, Cecil and Nellie Eagan Black; brothers, Jesse and Frank; sisters-in-law, Joanna Black, Betty Black and Doris Owen; and great-nephew, Josh Owen.

Miller Funeral Home in Metropolis is in charge of arrangements.