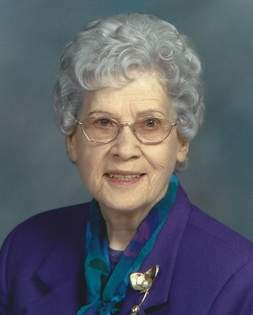 Frona Belle Davis, 97 of Fairfield died at 5:25 PM, Sunday, August 11, 2013 at Fairfield Memorial Hospital. She was the youngest of seven daughters born to Jacob and Frances “Fannie” (Tucker) Fleck in White County near Enfield. She married Rev. Wm. Ellis Davis September 12, 1946 at the Carmi First Methodist Church. She and her husband served several United Methodist Churches in the Southern Illinois Conference. In 1976, they retired from the Mt. Erie Charge and moved to Fairfield. Rev. Davis died February 22, 1983.

Frona is survived by care givers Sandy and Bill Naney of Fairfield and several nieces and nephews.

Funeral services for Frona will be held Friday, August 16, 2013 at 2 PM at the Johnson and Vaughn Funeral Home in Fairfield.

Visitation will be from 1 PM Friday until service time with burial in the Little Zion Cemetery near Enfield, IL.