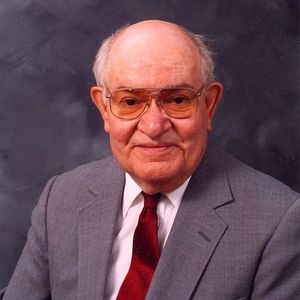 He was born October 14, 1917, in Harrisburg, PA, the son of Samuel and Mary Ann (Stemler) Mader. He married Madalyn C. Minnich on October 9, 1948 in Boiling Springs, PA. She preceded him in death.

He is survived by one daughter, Susan E. (Greg) Anvick of Hoopeston, IL; two grandchildren; two great-grandchildren; two nieces and four nephews. He was preceded in death by his parents, one son Jan K. Mader, one sister and two brothers.

Mr. Mader was a graduate of Dickinson College in Carlisle, PA and Wesley Theological Seminary in Washington, D.C. He served churches in Vira Charge, Dillsburg and Mt. Holly Springs, PA. He later served churches in the LaPrayer Center circuit in Princeville, Washington and Springfield, IL. Dick was also an administrator of the Sunset Homes in Quincy, IL. for 17 years. After retirement, he filled in at many area churches, when needed. He was also a reading volunteer at John Greer School in Hoopeston. He was a member of the Owl Club, enjoyed gardening, fishing with his friends and in his later years, he enjoyed feeding his pet squirrels. Dick especially loved his grandchildren and family.

Funeral services for Rev. Mader will be held Thursday, September 19th at Hoopeston United Methodist Church. Visitation will be from 10 am to 11 am, with the services at 11 am and dinner will follow at the church. Expressions of sympathy can be sent to his daughter Sue (husband Greg) Anvick at 707 E. Penn St., Hoopeston, IL 60942.