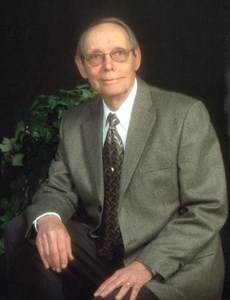 Ray B. Porter, 81, of Carmi, passed away Thursday, June 28, 2012. He was born March 15, 1931 in Jackson County, the son of Ray and Flava Belle (Jared) Porter. Ray graduated with his bachelor's degree from McKendree University and his master of divinity from Drew University in New Jersey. He was married to Joan Marlene Hall on June 22, 1951 and she survives.

Ray was a minister of the United Methodist Church for 50 years and retired as a district superintendent of United Methodist Conference. He was a member of the Carmi Rotary Club, William McKendree society, and was very active in the White County Historical Society where he served as Treasurer. Ray's favorite pastime was walking his dog, Lady.

Ray was preceded in death by two sisters, Juanita Dominick and Wanda Barnhill; and a grandson, Nathan Shipley.

Memorial services for Ray B. Porter, 81, of Carmi will be at 6 p.m. Tuesday, July 3, 2012 at First United Methodist Church in Carmi with Rev. Gary Feldman and Mike Fields officiating. Friends may call on Tuesday, from 4 p.m. until time of service at the church.

Memorial gifts may be given in Ray's name to the First United Methodist Church in Carmi and will be accepted at Campbell Funeral Home in Carmi, who is in charge of arrangements. For more information, please visit our website at campbellfuneralservices.com