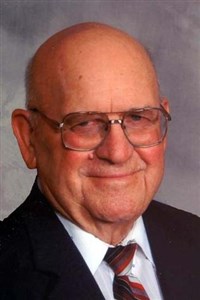 Visitation will be from 6-8 p.m. Saturday at Summers-Kistler Funeral Home in Olney. Services will be held at 2 p.m. Sunday at Bethel United Methodist Church in rural Wayne County with Rev. Sam Totten and Rev. Mark Canada officiating. Burial will be in Wells Cemetery in rural Wayne County.

He worked for J.W. Sanders Oil Company until he was called into the ministry in 1958. At that time he attended Garrett Theological Seminary near Chicago. He served in churches in Calhoun, Ebenezer, Bethel, Oliver Branch, Creal Springs, Stonefort, Pittsburg, Beecher City, Shumway, Cahokia, Shattuc, Odin, Noble, Passport, Harmony, Mt. Zion and Landes. He graduated from Clay City High School, where he was a cheerleader. He served his country in Germany during World War II, as a member of the U.S. Army.

He was preceded in death by his parents, J. Milnor and Verda Bissey; seven brothers; four sisters; one granddaughter; and one great-granddaughter.

Memorials may be made to Bethel United Methodist Church or the Retired Ministers Association.