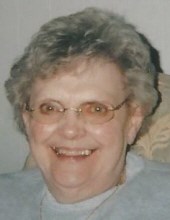 She was preceded in death by her parents, her first husband Max Swan, brother Perry Holland and stepson David Schmink.