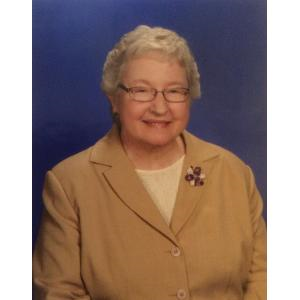 Bettie Wilson Story, 81 of Bloomington passed away on Saturday, November 1 after a short illness at Heritage Health of Bloomington.

Bettie’s celebration of life service will be held on Wednesday, November 5, 2014 at 10:30am at Wesley United Methodist Church of Bloomington with Pastor Camilla Hempstead officiating. Following the services a luncheon will be held at the church. In lieu of flowers memorials may be made to the Geoffrey L. Story, Jr. Endowed Scholarship at Illinois Wesleyan University, P.O. Box 2900, Bloomington, IL 61702-2900. Calvert & Metzler Memorial Home, Bloomington, IL is assisting with arrangements.

She is survived by her husband of 61 glorious years, Geoffrey L. Story, Jr., retired professor of Religion at Illinois Wesleyan University. She is also survived by her son, Greg Story of Fairhope, AL, and daughter, Anita Story Friedmann, and son-in-law, John Friedmann, of Norfolk, VA. She has a beautiful granddaughter, Holly Story Miller, and her husband Zack Miller, and two great-grandchildren, Ellie and Haylee, living in El Paso, TX.

Bettie was born in Skipperville, AL. The daughter of a United Methodist minister, she lived in numerous places in AL, including Opelika where she first met G.L. They both graduated from Birmingham Southern College, where Bettie received highest honors and was inducted into Phi Beta Kappa as an English major. They married in Mobile, AL in 1953. They moved to Bloomington in 1966. A lifelong proponent of the importance of libraries, Bettie worked for the Cornbelt Library System in her early career. She then spent the next two decades working as the Director of Communications for the the Illinois Great Rivers Annual Conference of the United Methodist Church, retiring in 1998. There she edited a weekly newspaper, the Reporter, and received numerous accolades for her writing. In addition, she was an accomplished children's book author, publishing three novels and several biographies.

All of her life she considered herself first as a writer and was an avid volunteer promoting authors and their writing. She was the 20-year long director of the Illinois Wesleyan Writer's Conference bringing numerous nationally-known authors to Central Illinois. She was active in the National League of American Pen Women holding leadership positions.

Bettie was an active member of Wesley United Methodist Church for almost 50 years. Committed to spreading the good works of the church around the world, she was chair of the Missions Committee for many years. In addition, she was an initial and strong proponent of the founding of Africa University in Zimbabwe, a project of the worldwide United Methodist Church. Most dear to her heart was her many years of service on the Bloomington Public Library board of trustees where she presided as president for several years.

She will be dearly missed by the many people she loved and influenced throughout her life.