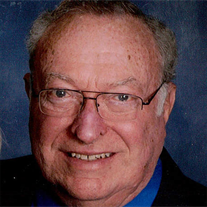 Rev. Larry Arden Olson, 78, of Cedar Rapids, Iowa, died Sunday, June 12, 2016, at Emery Place in Robins, Iowa, following a brief illness. Visitation: 5:00 – 8:00 p.m. on Friday, June 17, 2016, at Murdoch-Linwood Funeral Home & Cremation Service, Cedar Rapids, Iowa. Service: 10:00 a.m. Saturday, June 18, at the funeral home. Private burial: Cedar Memorial Park Cemetery, Cedar Rapids. Following the service, friends are invited to join the family for a luncheon in the Legacy Center at Murdoch-Linwood.
Survivors include his wife, Phyllis; son, Ken of Boulder Creek, California; daughter, Cindy (Bob) Mettler of Cedar Rapids; sister, Betty (Ken) Lundgren of Bloomingdale, Illinois; brother-in-law, Don Vinson of Los Angeles, California; granddaughter, Allison Mettler of Central City, Nebraska; grandsons, John and Mark Mettler of Cedar Rapids, Austin Olson of Boulder Creek, California, and Andrew Olson of Chico, California; and five nieces and seven nephews.
He was preceded in death by his parents, an infant son, and three nephews.
Larry was born on May 31, 1938, to Arden and Beatrice (Anderson) Olson in Melrose Park, Illinois. He graduated from Proviso Township High School, Maywood, Illinois, in 1956. He enlisted in the Navy and attended the Naval School of Music in Washington, D.C. for nine months following which he served as a musician in the DesLant Navy Band in Newport, Rhode Island, until he was discharged with the rank of MU2 in 1961.
He was united in marriage with Phyllis Vollertsen in Newport, Rhode Island on October 7, 1961. The couple moved to Illinois where Larry continued his education, receiving a bachelor’s degree in music education from the University of Illinois, Urbana, in 1965. He taught elementary and high school band and chorus in LaHarpe, Illinois, for seven years while completing his master’s degree in music education from Western Illinois University in Macomb, in 1967.
In 1971, Larry left teaching and operated Olson’s Hardware in LaHarpe with his wife for seven years. In 1974, he became a candidate for ordained ministry of the United Methodist Church and served as a part-time lay pastor in the LaHarpe area until December 1977. He became a full-time lay pastor in January 1978, and moved his family to Hillsdale, Illinois. Thereafter, he served Illinois United Methodist parishes at Alpha-Andover, Roanoke-Secor, and Albion-Bethel, until retiring in 2003. Larry was a member of the Illinois Great Rivers Conference of the United Methodist Church. In 2004, he moved with his wife to Cedar Rapids, where he became a dedicated driver for Meals on Wheels and sang with the choir at St. Mark’s United Methodist Church until his recent illness.
Larry was blessed with the gift of music. He especially loved marches, marching bands, traditional and religious vocal and instrumental music. He was honored to have been a member of the DesLant Navy Band when they played honors in Montreal for the ceremony at which President Eisenhower and Queen Elizabeth II dedicated the opening of the St. Lawrence Seaway, in 1959. At various times, Larry sang with a gospel quartet, community choirs, and as a soloist. Larry enjoyed watching animals, sunsets, thunderstorms, and playing with his cat, Vinnie. He was proud of his children and grandchildren and loved spending time with them. He enjoyed taking his grandchildren to their events in “Grandpa’s taxi.”
In lieu of flowers, memorials may be directed to St. Mark’s United Methodist Church in Cedar Rapids, Horizons Meals on Wheels, or the Preacher’s Aid Society and Benefit Fund, P.O. Box 10202, Springfield, Illinois 62794-9207.
Please share a memory of Larry at www.murdochfuneralhome.com under obituaries.