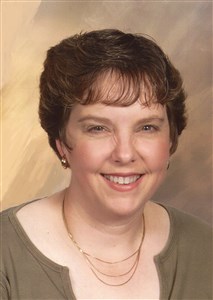 Sue K. McCoy, 55, of Port Byron, passed away peacefully Thursday, June 16, 2016, at her home. Celebration of Life Services will be 10:30 a.m. Wednesday, June 22 at Church of the Cross United Methodist Church, 22621 Illinois Route 2, Port Byron. Visitation will be 4–7 p.m. Tuesday, also at the church. Burial will take place in Pleasant Point Cemetery, Port Byron. Memorials may be made to the Church of the Cross or the University of Iowa Cancer Center. Arrangements are in the care of Gibson–Bode Funeral Home, Port Byron.
Sue was born March 30, 1961, in Geneseo, Illinois, the daughter of Roger Cathcart and Sally (Nicholson) Cathcart. She attended Riverdale Schools, graduating in 1979. She married Chester B. McCoy on Aug. 14, 1982 at First United Methodist Church, Port Byron. Sue began her career in clerical work as a secretary at the Rock Island Arsenal from 1981-85. She then began working for First United Methodist Church, Port Byron in 1992. In 1998, the Twin Rivers Cooperative Parish was formed and Sue became the office manager, a position she continued in until May of this year. In January 2011, she also began working part time at Gibson–Bode Funeral Home. Sue was a longtime member of First United Methodist Church, Port Byron, prior to transferring her membership to Church of the Cross. While raising her boys, she enjoyed volunteering her time as a Riverdale PTA member and helping with Cub Scouts.
Sue was a much beloved wife, mother, daughter, sister and grandmother. She will be remembered for the twinkle in her eyes, the smile on her face and her silent laugh.
She is survived by her husband, Chester McCoy; sons, Blaine (Keri) McCoy, Naperville, Illinois, Jeremiah McCoy USMC-MSG American Consulate, Frankfurt, Germany; mother, Sally Nicholson, Port Byron; granddaughter, Rebecca Lynn McCoy; sister, Sherri (Michael) Moorehusen, Cordova; brother, Tom (Sherri) Cathcart, Port Byron; half-brother, Sean Cathcart, Kentucky; father and mother-in-law, John and JoAnn McCoy; and various nieces and nephews. She was preceded in death by her father, Roger Cathcart, and grandparents, Cliff and Edith Cathcart and Minnie and Lloyd Nicholson. Share a memory or condolence at www.gibsonbodefh.com